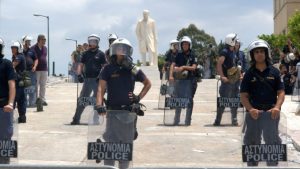 Greece faces another debt crisis and and the EU and ECB are set to impose yet another wave of austerity on the country, brushing democracy aside in the process, writes Kevin Ovenden

A looming debt repayment in July, which there is no money to meet.   A tightening squeeze by the officials of the European Union, European Central Bank and International Monetary Fund, the Troika, on the Greek government.

Yet further crushing austerity measures imposed on the mass of impoverished Greece.

That description from this time last year also fits the crisis in early summer 2016 afflicting the people of Greece, the country hardest hit by the economic crisis which began with the collapse of Lehman Brothers bank eight years ago.

The attention of the British and European media was turned to Greece in June and July of last year as the confrontation reached its height between the government of Alexis Tsipras, trying to negotiate its way out of devastating austerity, with the Troika of creditors demanding it.

Across Europe there were solidarity protests. Sympathy with the people of Greece went wider than even the numbers protesting.

It grew when the EU showed its true face in the middle of July, forcing the capitulation of the Greek government after what insiders described as the “crucifixion” and “mental water-boarding” of Tsipras and the Greek delegation.

Since then, the cameras and the foreign affairs editors have departed Athens. The EU and Troika officials overseeing the imposition of austerity against the expressed democratic will of the people of Greece – confirmed in both a referendum and a second general election last year – have not moved on.

Nor should the labour movement and the left in Britain and Europe. The battle that was more visible 12 months ago continues today. It is intensifying. The case for solidarity and for opposing the brutal and anti-democratic EU is as strong now as in 2015.

That solidarity is not best served by retreating from the position of opposing the austerity diktat from the European elites last year to saying in Britain that the labour movement should vote in the referendum with those elites.

The pro-austerity forces within Greece were not strong enough by themselves to overturn the popular opposition and the anti-austerity policy of the Greek government elected in January 2015.

They remain weak. Big business and its parties – principally the Tories of New Democracy – are deeply concerned that even after the passing in parliament last Sunday of the pension cuts and VAT rises demanded under the Third Memorandum the Syriza-led government will not be able to make them stick.

That was the message which Michalis Sallas, president of Piraeus Bank, one of Greece’s largest, gave to the Financial Times newspaper this week.

He complains that the government has signed up under pressure to a vast array of austerity and privatisation measures, but that things such as the sell-off at fire-sale prices of the regional airports to a German corporation are mired in delays.

Those delays and others are due to the continuing resistance to austerity in Greece. Last week saw a strongly supported two-day general strike and big protests on Sunday, which was the May Day celebration in Greece – delayed a week due to the Orthodox Christian Easter falling on 1 May.

Sallas and the Greek employers’ federation are very clear. They are relying on the EU to force the government to squeeze working people further because the employing class does not have a strong political force in Greece to do it itself.

But this last weekend showed that there is still majority opposition in Greek society to austerity and still resistance by the labour movement. One characteristic of the demonstrations across the country was the organised participation of refugees.

Not only is the social crisis deeper in Greece now than last year when the cameras were here. Added to it is the appalling humanitarian crisis facing the refugees under the EU-Turkey deal of shame.

The deal with Turkey’s authoritarian president Erdogan that Germany’s Angela Merkel drove through not only means the deportation of refugees back to Turkey, and thence – according to Human Rights Watch and Amnesty International – some of them hurled back into war torn Syria.

It has also led to the strengthening of razor wire borders around Greece and heading up through the Balkans to Austria, Germany and the core of the EU.

It has left 50,000 refugees trapped in Greece. In a country where unemployment is 25 percent and those working are about to be hit by huge increases in pensions contributions, many commentators predicted that this would lead to an explosion of racism and support for the fascists of Golden Dawn.

Former Greek finance minister Yanis Varoufakis is among those urging that across Europe – including in the British referendum – we must stick with the EU and strengthen it, despite the torture it is inflicting in Greece.

He says that the alternative, breaking with the EU of austerity, racism and war, will lead only to the growth of racism and the far right.

He predicted this time last year that that would happen if the Greek government was forced to capitulate to the Troika.

He was wrong. There is a wave of popular solidarity with the refugees in Greece. Papers have been full of examples of people opening their homes.

One unemployed man and his wife in Idomeni, where many refugees are trapped on the border of Macedonia, are typical.

The couple, with two kids, opened their home and garden to destitute refugees. He told journalists:  “There were four of us in our house. Now we are 23 – and everything is fine.”

This extraordinary and moving solidarity is the product of left wing forces taking the arguments to support the refugees deep into the trade unions and social movements on the basis of a clear policy: against the EU of fences and austerity.

The government, meanwhile, in seeking to accommodate the demands of the EU over austerity and the refugees is not bringing progressive reform – either in Greece or in Europe – any further forward, but is going backwards.

Last April detention camps for migrants were closed down. Now the same government of Alexis Tsipras has re-opened them – as part of the EU anti-refugee policy.

Still, the Troika are demanding more. Disagreements between the EU and IMF are about how to squeeze working class Greece, not whether to do so.

On Monday of this week European finance ministers agreed the most outrageous plan. Greece is to pre-agree even more austerity measures.

The plan would mean that if Greece does not meet obligations over the next two years – which include the impossible benchmark of achieving a budget surplus of 3.5 percent to be handed in debt repayments to the banks and ECB – then another round of savage austerity measures would be automatically triggered: by presidential decree, not democratic vote in the parliament.

It is increasingly clear that the demands of Eurozone and EU membership require the dangerous curtailment of even limited parliamentary democratic norms. This is Greece – a country which had a military coup in the 1960s.

The EU elites are worried that rows about these outrageous measures will reignite the sense of solidarity with Greece shown across Europe 12 months ago. They are particularly concerned that it will have an impact on the British referendum and encourage the left wing case for breaking with the EU.

For it is very clear that if the EU is strengthened – which is what a Remain vote in the British referendum would do – then it will use that boost to drive austerity and anti-refugee policy deeper into Greece.

That’s why for the same reason, but the opposite intent, forces of the fighting left and social movements in Greece are voicing their solidarity with the Lexit campaign in Britain.

It is not just David Cameron who would be strengthened in his domestic war against the poor in Britain by a Remain vote. So would the EU and all the forces of austerity in Europe, especially in Greece.

A rupture arising from the British referendum, however, would severely weaken all those – European and domestic – who are tormenting working people and the poor in Greece.

A strong left Leave campaign will help the weakest people in Greek society to end this seven-year austerity nightmare.